An adventure getting back on the railz in 2015! 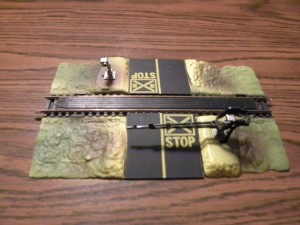 My brother Mike’s original Crossing Gate that started it all! He still has it!

Back in the mid/late 70’s when I was very young, I would say I had to be about 5 or 6 my older brother Mike had come to our home in Scottsdale, Arizona to take me to spend some time at his home in Tempe, Arizona. Little did I know or even Mike know that time spent at his home has stuck with me for so long and even very recently I had to review my memories with him to spark his on the whole thing.  While at his home he had a spare bedroom where his control line planes were suspended from the ceiling, wow was that ever so cool for a little kid to see.  How ever that was nothing compared to what he had setup on the kitchen table, an HO train running in a loop with crossing gates!!! To this day I could not tell you what train it was but the crossing gate, that just had me in total awww!

After that time spent at my brothers I would then have a fascination for model trains, when we moved to Tucson Arizona in 1979 my friend Brian across the street had a murphy bed in his room that was not a bed at all, when you pulled it down there were bunches of HO track and train cars along with a switcher engine. We would spend hours and even sometimes days laying out the tracks to make the biggest layout we could and then enjoy running the train over our rail design.

Christmas 1981 we had moved to El Paso, Texas where that Christmas I finally got my first HO train set. It was a 1981 Tyco “Big Logger” with a red and silver Santa Fe GP20 engine a few extra cars and track! 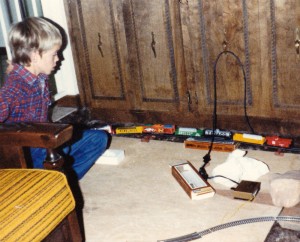 Even when my buddies in the neighbor hood came by that Christmas week to play I would choose to just stay in and run my Big Logger! Sadly after some time my father went to oil the engine per instructions but either used the wrong oil or too much because after the oil when I went to run it a flame came out from the front trucks and the GP20 stopped dead on the tracks! My father felt bad and the next day drove me into town to a local hobby store and bought me a Chicago and North Western engine. Could not tell you what model but I knew it was a much nicer engine how ever it was not my Santa Fe. A few years later we moved up to Albuquerque, New Mexico and he let me use a small area in the garage to build a nice little 4ft x 8ft layout. I modeled the Sandia Mountains that are out here and had my trains run through them but never really did much over all as by then I was in the late middle school years in 1984. That is when I got my first Commodore 64 computer which then became my whole life of running BBS’s and coding, that computer hobby turned into occasional computer service to other kids computers in high school which then turned into what I do now, owning and running a small IT company. So trains just faded and fast.

In the early 90’s I was living with my now wife in our apartment in Phoenix, Arizona and started to build a new 4ft x 8ft N scale layout, that faded after a year as we got married and had our first child and moved back to Albuquerque, New Mexico where work was the priority. As time went on our second child was born and my wife Stacey told me to get a hobby and stop working 24/7 so I got into haunted houses. For 12 years we built and ran a charity haunted house that has been featured nationally and even on Good Morning Canada due to our model and how from the sight of it on the out side you would not believe how big the attraction felt on the inside.  Those techniques will be used in my layout build, it is amazing how close prop-building and layout building are at times.

The Polar Express at the D&SNG!

In December 2013 we took our kids to the Durango Colorado Polar Express, that was a treat as even the author of the Polar Express was there for a book signing. Well my wife must of seen some sort of excitement the trains brought me as she then started hinting I get back in to trains. After spending 2014 thinking about what scale would I do, would it be indoor or garden I finally locked in on HO scale! Now where we live we don’t have basements and I have 5 children so space is an issue. Our garage is filled with ATV’s and post haunted house props and such, so this is where this whole new adventure begins by first making room for our layout during this spring of 2015!!!

The objective of this website is broken down to two things:

A) To share and explore trains in real life and in modeling.

B) To share in my adventure back into model railroading with a set budget and space. The space is really not that bad, basically I will be doing a layout based on The Rio Grande and Santa Fe lines in our garage and as for the budget well there are ways around that!

So almost in the words of my brother Mike, I invite you to join me on my ride of re-discovery!

Oh by the way, Mike (my brother earlier mentioned) has his own website all about his adventures in model aviation, you can check his out at www.flyboyzblog.com. You can also read about Mike’s journey back into modeling here.