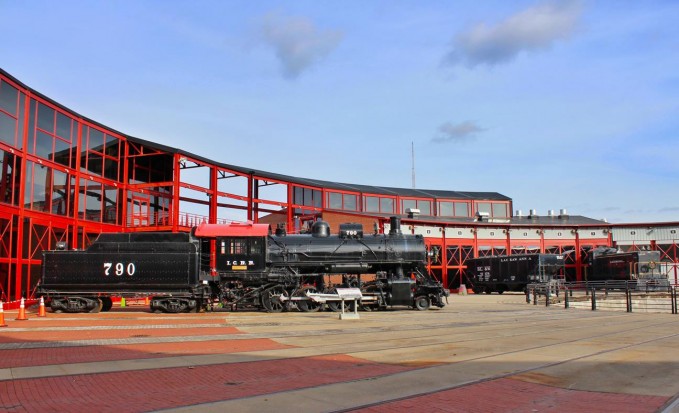 Above Image: Steamtown showing part of their roundhouse and turntable next to the Expo!

On March 28th my brother Mike (who you might remember reading in my ABOUT page, how he got me hooked on model railroading when I was a kid) attended “The Fine Scale Model Railroad Expo” on March 28th 2015 and brought a new element to the whole show.  This new element was that Mike used facetime with me while he was there so I could attend virtually! It was interesting and great, I was able to talk to vendors and see them face to face via Mike’s iPad and my Mac using facetime.  Some of the vendors just thought it was great being there they were in Pennsylvania talking to this guy in New Mexico all the while I was shopping, buying and attending the show myself!

I did score a great find, again thanks to Mike! I told him keep an eye out for mining type buildings and he found one from Campbell the “Ho-Silver Spur Mine No. 388”.

The price I got this for was less than half of the online retail and auction current prices I have seen out there, so this will be a nice new addition and will do well in the D&RG part of my layout.   The Fine Scale show focused mainly on Craftsman Structure and Kit Building in mostly HO with an attendance of around 400 including a lot of the best craftsmen in America.  There were also dozens of Clinics on various structure and scenery building topics that took place through out the day.  The expo had a contest room with models on display plus a $1,000.00 Grand Prize up for grabs!

Here is a video Mike took walking through the show using his iPad for all to experience and well I for one was not there physically but I was digitally and must say it was cool being able to see and talk to vendors while 2300+ miles away!

Hey, this all looks familiar…oh, wait, I was there!! It was a great show and I recommend it to all modelers!

I was there too on your iPad like Max Headroom from the 80’s!! LOL

Shane you may want to try the National Matchbox convention they have at the Marriot each summer in Albuquerque. Though it is mainly for Matchboxes and old die cast toys they do have train items
there also. I have been going for the past several years and got some great deals on the original series Matchboxes that I collect..

Rails Along the Rio Grande 2019!
1,450 views
Then & Now – The Albuquerque Depot
552 views
The Fine Scale Model Railroad Expo
510 views
Sorry, there are no polls available at the moment.