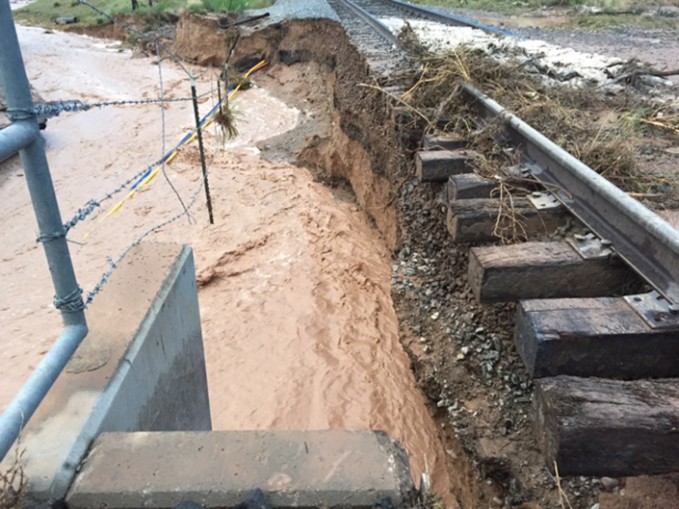 As published in the Albuquerque Journal tonight I thought it was worth sharing due to all the rain we have gotten this year.  If you live or once lived in New Mexico the brown desert we were all use to  is so not the case this year.  With all our rain fall this year so far we are very green for a desert, much like it was when I was a kid back in the early 80’s before all the droughts.   How ever all this rain coming down on such dry soil is raising havoc in many area’s especially when we get a heavy monsoon that just down pours inches of rain in a few minutes! 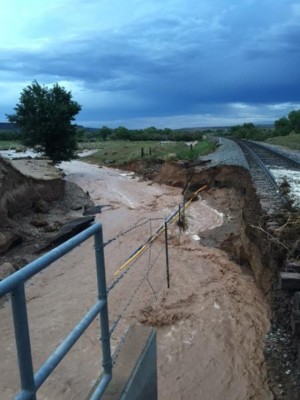 All Rail Runner train service will be canceled through the weekend after flash flooding washed out the tracks north of Algodones, said Augusta Meyers, spokeswoman for the Rio Metro Regional Transit District.

The water washed out about 100 feet of track on the bridge at Arroyo Maria Chavez between 6:30 and 7 p.m. Friday, according to the district’s website.

“They’re going to start bringing in boulders and gravel,” Meyers said. “The crews will start working to re-stabilize the tracks and rebuild ground beneath it so they can start running commuter service again on Monday.”

About 100 northbound and southbound passengers on the train had to be bused between Santa Fe and Bernalillo stations Friday night.

Meyers said the tracks in the same area had been washed out a couple years ago, as well.

The Rails, Trails, and Ales Brew Tour Kick-off event — a beer tour in Albuquerque and Santa Fe — was scheduled for Saturday and will be postponed until a later date.

Go to www.riometro.org for updates.